Somehow I find lot of people interested in product ideas end up meeting me and the ideas often surprise me either with the uniqueness or lack of it. The lack of skills and the reluctance of pick it up seems to be common trait in most of the cases. But then some people understand it and try finding mentor’s and succeed. Perhaps this will be a good idea to share some of the thoughts from personal experience.

I think this is one of the important aspects of succeeding with a startup idea in any area. But care must be taken to make sure that the niche will grow enough to provide the return to sustain the idea (product or service whatever the idea is). The second point it should be possible to generate enough revenue to keep going.

There 2 personal experiences of finding a niche segment and then not able to scale up : though there was a rock solid team, timelines were met etc etc.

Find a niche, boot strap and run after MONEY !

In the first example, we had a photo agency where we catered to a niche – sports photography and within the segment we focused on football. This was during the time i-league was started and we even had AIFF as client.We had a super cool name :

We had award winning photographers across the country, we probably managed to publish photos faster the best, we trained photographers to upload photos, process them & we paid them probably 3 times what they used get paid. All were happy. Though all were happy, we had issues with collecting payments. After an year of operations throughout which we were break even, we had to wind it up.

Why we didn’t take off ?

I think we lacked in collecting the payments. Personally, I was too shy to ask for payments. I don’t think we were ready with money! Technically, though we had found a niche and managed to bootstrap, we couldn’t generate enough revenue to keep going. Having right skills in finance is very important. This is one point often Entreprenures overlook as they get carried away by passion. For us this was the best thing, as photography was our passion 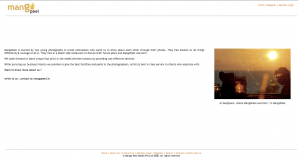 MangoPeel is started by two young photography & travel enthusiasts who came to to know about each other through their photos. They had dreams to do things differently & courage to do it. They met at a beach side restaurant to discuss their future plans and MangoPeel was born. 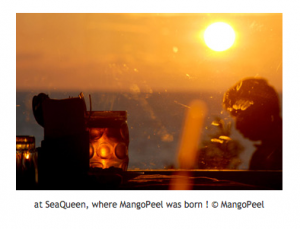 Find a niche, but make sure that there is enough growth in demand

This is a particularly interesting case as this was novel & the first of its kind. We launched India’s First Web TV – IndiaVibes.TV

Once again everything was uber cool, India was about to witness a massive upgradation in internet connectivity, the magical 3G was about to get launched. Our timing looked good. We had enough programs, impressions everything looked good. But one assumption failed – the high speed internet wave didn’t take off the way we expected. This was something we never expected as projections regarding internet speed & availability at low cost miserably failed to meet the expectations. Years down the down even now the 3G connectivity is poor across the country. The writing on the wall was clear. We had wind up the show in sometime.

This was unfortunate, but I think this can happen to anyone even if everything looks good. Finding a niche & then making sure that there is enough demand is very important. If there is not enough demand, we MUST pivot and move ahead.

Raising funds are easier now with the token based economy and its a good idea if you can make use of the current Eco-system to find seed money.

Subject of the post is probably the most discussed topic in the service industry – Scaling up. We knew this from start that we have to manage how we hire resources, watch the costs and scale. I managed to drive the team from our garage office to a good facility, brought in processes for managing the work force & we now have a an army of brilliant engineers dedicated finance & HR teams. Still we hardly ate,  we were always working.

Things were so bad that around that April (2010) I ran into serious sleeping trouble, I didn’t sleep for 8 days & the doctor told me – after giving a look as if he is talking to an alien – that you can come out of it yourself, it will be tough but that’s the better solution than he prescribing medicines – which I will not take anyways. I had to attend a wedding in north east and planned a 2 week vacation which I thought will help me to come out of the situation – it helped. I carried a book with me as I wanted to read it again. When I read it the first time, it didn’t much sense but this time after being in the shoes of an entrepreneur for nearly 2 years, it made sense. 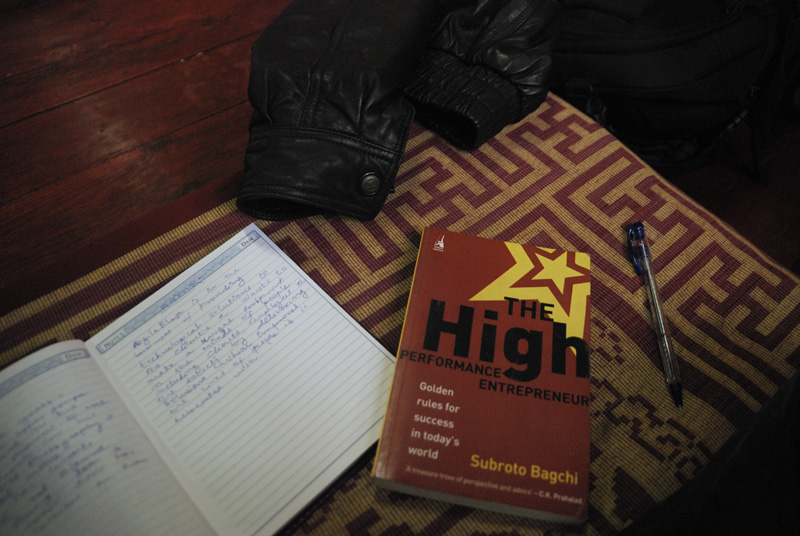 No, Its not a cliche story. I didn’t sit there and read much and there was no revelation (Other than the long discussion which few young monks started with me on religions, Bilekuppe etc). I came back home, started working again and forgot about the book. Weeks later, I started reading it again and I came across a section where the author was mentioning about hard work and the amount of time in hours per week the most successful businessmen dedicate . This was the first time I had thought about such thing like number of work hours in a week. I calculated the amount of time I spend – the previous week it was roughly 116 hours, this week its already 80+ hours and I was scared to think beyond these 2 weeks. There was something seriously wrong and this is when I  thinking about scaling up my team and started analysing how I spend time.

Being a startup means everyone has to multi-task and sometimes do the jobs which no one else will do. (Like how I used to clean the sole wash basin in our old office) So there was no point about stop doing multi-tasking. It was about make the best of the available resources. Soon I realized that the core problem was my worked spanned across marketing, execution, project planning, talking to clients from technical to finance matters to occasional chit chat. The first action item was to make the business development and market straight and we were searching for business development resources. By June end we had the business development team ready and they started putting together missing parts of the puzzle.

Now I had time to focus on my technical workforce and I was preaching agile methodologies and SCRUM for sometime then. But there were missing pieces and soon understood the key is to empower your team, let them own projects at the same time allowing marginal errors & more than anything trust their capabilities 100%

I started giving developers and lead developers more freedom to innovate, involved them client communications more than ever and started paring up senior engineers and the business development team. I have been applying, my method of learning from practice with little guidance. I strongly believed, inherently people are good enough to learn and not to commit errors which will cause catastrophe. In the mean time SCRUM meetings were introduced for every team from business development to HR. Initially it required some serious efforts to keep things going but now after nearly 6 months with SCRUM, we are looking good.

Another important idea implemented is Huddle – an internal social network which is meant to improve communication and knowledge sharing. Though we were small in size, because of the shift timings often communication between different teams were not happening and I wanted a platform for knowledge sharing which can be later used for coordinating activities from CSR initiatives to birthday celebrations or promoting art and culture within the staff. Huddle is in the nascent stages now, but hoping this to grow and become an integral part of the organization soon.  (The name Huddle is carefully chosen to go well with the Agile practices we are following)

Now, after nearly 6 months of sole focus on developing the organization from within, we have started feeling the differences. Finally, after some serious struggle and hard work we have different functional parts of the organization running nearly smoothly. Few things we plan for future is to give more and more focus on communication, improve technical skills my continuous knowledge sharing sessions etc.

To summarize, the lessons learned are:

There should be a balance between how much business you do and how well you are able to collaborate with your own team. Its very difficult to find the balance but its essential for scaling up.  The more we collaborate its better for scaling up as everyone learns in the process and becomes ready for the challenges. One should never forget to look back to our own team in the struggle to grow and scale up. The employees first policy may not be 100% correct, but keeping balance between how we spend time between employees and clients is important. I think, we were probably few months late in starting the initiatives, but we have done it atlast and now waiting for the positive results which we are confident of.

Yes, Collaborating the agile way is method to succeed and scaling up.